INDIA WINS A THRILLER TO SEAL THE SERIES

Virat Kohli’s team sealed the series defeating New Zealand in a nail-biting match. India with the likes of Virat, Rohit and Bumrah clinched the 3rd ODI by 6 runs  in Kanpur’s green park stadium. 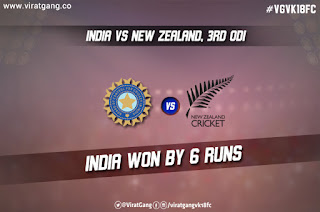 Visitors were well on board chasing 337 until Jasprit Bumrah came to bowl fiercely in death overs. Bumrah defended 15 runs in the last over and made sure hosts win the decider. New Zealand openers started well with Martin Guptill and C Munro adding 44 runs for the first wicket, Bumrah provided India its first breakthrough in the sixth over sending Guptill back in the pavilion at the score of 10. Captain Kane Williamson joined Munro in the middle and weaved 109 runs partnership for the second wicket, both the batsmen gave New Zealand an ideal platform to chase the mammoth target. Chahal broke the centurion partnership and got back to back wickets of C Munro (75) and Williamson (64). Taylor and Latham kept ticking New Zealand’s scorecard and scored at a good run rate. Tom Latham played some heroic shots showing solid technique against not just spinners but also against Pacers. He dominated Indian bowlers in the middle and death overs as well.

Bhuvneshwar kumar who was having an off day on the field produced a perfect Yorker to get HM Nicholls, Indian now needed 32 runs from 19 balls.  Bumrah controlled the 48th over very well giving Bhuvi some cushion of runs, it went down to 15 runs in the last over to win for New Zealand. Bumrah bowled last over rentlessly giving no room to batsmen to play any kind of shot and helped India defend 337 runs of total.

Earlier Indian batsmen showed the great solidity in their batting after being invited by visitors to bat first. India lost Shikhar Dhawan early at the score of 14. Rohit Sharma and skipper Virat Kohli gave visitors no other chance in atleast next thirty overs. Rohit played some effortless shots against spinners and looked in fine touch. He completed his 15th ODI century off 106 runs smashing 11 fours and two sixes whereas Virat Kohli on the hand looked set from the very first ball he faced, he played no loose shot and also got to his 32nd ODI century. Both the batters, together added 200 runs on the board for India. New Zealand bowlers seemed to pull back the game after consecutive wickets of Rohit Sharma (147) and Hardik Pandya. Virat, also couldn’t stand for long after his century and fell to Tim Southee while trying to clear the boundary at long off. Dhoni and Jadhav tried hard and unleashed the ball out of the park quite a few times flourishing India’s innings to 337 runs. New Zealand’s bowlers did a good job and pulled back game, conceding just 85 runs in the last 10 over with two set batsmen who were looking in blasting touch to take India even more ahead.

This was seventh consecutive series win for India in ODIs since the time Virat Kohli took over the full time captaincy in all formats.