Kane Williamson’s decision to bat first after winning the toss backfired him completely after Team India outplayed the Kiwis with their disciplined bowling effort, followed by a quality run-chase from the experienced batsmen. 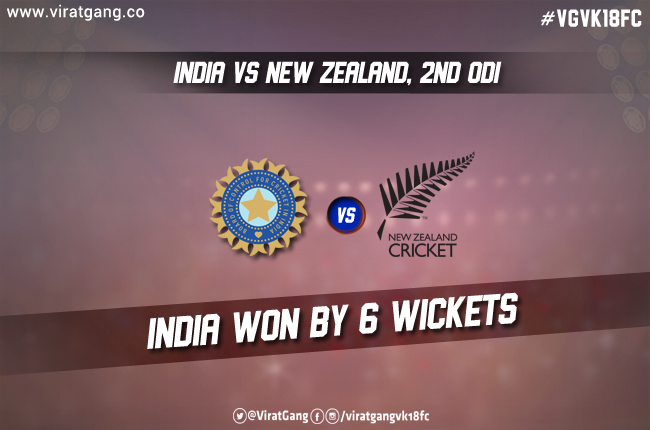 Hopes were pretty high from the Blackcaps, considering their well-organized effort and extraordinarily clinical performance in the 1st Paytm ODI at Mumbai. But Team India manged to balance the things at Pune by displaying some really quality Cricket in order to prove their mettle.

No New Zealand batsman managed to get an upper hand over the economical as well as the lethal bowling of Men in Blue. Indian bowlers made sure to keep the Kiwis calm throughout the innings. As a result, there was no explosion whatsoever at the end of 1st innings.

Bhuvneshwar Kumar and Jasprit Bumrah’s pace seemed way too hot to handle for the New Zealand batsmen, including their in-form batsman – Tom Latham. The way they consistently kept picking up wickets by bowling economically restricted New Zealand to mere 230 runs with a wicket in hand.

Though New Zealand managed to produce an early wound to India’s hopes by dismissing Rohit Sharma, Shikhar Dhawan made sure to lead this run-chase from the other hand. He was well-accompanied by Virat Kohli, Dinesh Karthik, Hardik Pandya and MS Dhoni with their handy contributions, which helped India seal a convincing victory over New Zealand in just 46 overs.

The decider of the Paytm ODI Series will be played between India and New Zealand on Sunday, 29th October 2017 at Green Park Stadium in Kanpur.