Team India continued their winning streak after sealing an impressive 5-wickets win over Australia in the 3rd Paytm ODI at Holkar Stadium in Indore. Indian batsmen certainly displayed plenty of character while chasing the target of 294 runs, posted by the visitors! 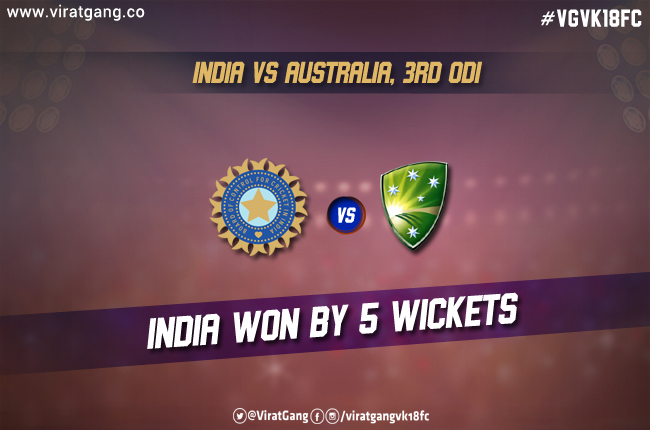 Australia’s Captain – Steve Smith finally managed to win a toss in the 3rd ODI and straight away elected to bat first, considering the pressure his team is going through trailing by 2-0 in the series.

Aaron Finch was finally seen in the playing XI and he certainly made the most of this opportunity by scoring a magnificent century. David Warner did managed to provide a good start to the team, along with Finch but failed to transform his short and sweet knock into a big one. Australian skipper – Steve Smith took full advantage of the platform created by the openers and gone on to score a composed 63 runs off 71 balls, he and Aaron Finch contributed 154 runs for the 2nd wicket partnership. Credits to India’s spin duo of Kuldeep Yadav and Yuzvendra Chahal who destroyed the middle order and limited them to 293/6 in 50 overs.

Chasing a target of 294 runs under the lights was never easy but Indian openers had the other plans. Rohit Sharma and Ajinkya Rahane didn’t let the bowlers get an upper hand over them and provided a smashing start to Team India. Though Rohit Sharma and Ajinkya Rahane had centuries up for grabs, but they failed to make it count by getting dismissed on 70 and 71 runs respectively.

Virat Kohli and Hardik Pandya took the initiative to sail the sinking ship and found success in doing the same not long before when Agar trapped the Captain with his leg-spin and dismissed him on the score of 28 runs. Manish Pandey joined in and batted responsibly along with Hardik Pandya, who made his surprising entry of coming in at No. 4 by scoring a dazzling 78 runs off 72 balls, consisting of 5 fours and 4 whooping sixes.

The crowd was delighted by MS Dhoni’s short presence, who passed on the opportunity of scoring the winning run to Manish Pandey. India has now bagged this series with 2 more ODIs still to play. Virat Kohli masters yet another run-chase for fun!