Indian team assassinated Australia in the first match of highly anticipated five match ODI series. Indian team took the lead with 26 runs victory over Australia. Rain shortened the second innings to 21 overs, posting 164 runs target for Aussie batters. Hardik Pandya turned out to be hero for India in the first match, with sensational knock of 83 runs from 66  balls and also rocked with the ball, ending up with 2 wickets. 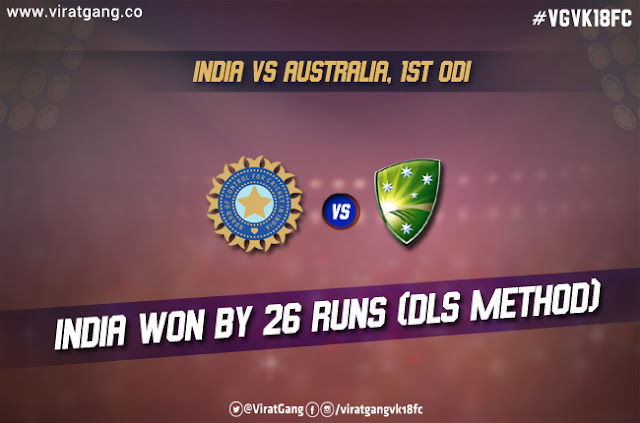 Australian batters surrendered in front of Indian bowling attack and managed to score mere 137 runs chasing 164 runs in 21 overs. Jasprit Bumrah provided India an early breakthrough in the form of  HWR Cartwright. David Warner being the key batsman in an inexperienced batting line of Australia up had the responsibility to take them above the line but he got stumped out on Kuldeep Yadav’s ball. Pandya, Chahal and Kuldeep Yadav Kept the momentum going on by striking up at regular intervals. Chahal, with his handy bowling, picked up three wickets in the absence of our main Spinners R Ashwin and Ravindra Jadeja. Glen Maxwell in the middle order tried to calm down the series of wickets felling and gave some hopes to Aussies, he did some fireworks with his bat and scored 39 runs in 18 balls with 4 sixes before falling to Chahal. None of the Australian batter gave support to Faulkner who was not out on 32* and wickets continued to fell at regular intervals, managing 137 runs at the cost of nine wickets in 21 overs.

Earlier Indian captain took the call of batting first, in the absence of Shikhar Dhawan, Ajinkya Rahane was made to open along with Rohit Sharma. India didn’t quite have  a very decent start with Ajinkya Rahane felling cheaply to Coulter Nile at the score of 5. Rohit Sharma on the other was not having the best of his time, with also being dropped in the slips by Australian skipper Steve Smith. Crowd was stunned and silenced when Indian captain Kohli had a rare duck, while playing an uppish square cut, Kohli was caught by Maxwell, who took a brilliant flying catch at point. India was put into deep trouble by an Australian bowling attack, things deteriorated further as Coulter Nile got Manish Pandey for duck in the same over. Kedar Jadhav  and Rohit Sharma tried controlling the situation but  couldn’t carry their partnership for took long as Rohit after much struggle got out to Stoinis for 28 (44). Kedar Jadhav on the other hand played some handy shots and took on the Aussies bowling attack but he also left Dhoni in the middle at the score of 87-5. After the failure of top order, MS Dhoni and Hardik Pandya came to the rescue, with Dhoni sticking to the one side of striker’s end, Hardik Pandya took the charge and soared India’s run rate, Pandya scored quick 83 runs from 66 balls, hitting five sixes and  five fours in his bizarre innings. After Pandya’s wicket, Bhuvneshwar kumar (32, 30b) and dhoni’s (79, 88b) partnership flourished Indian inning in final overs, scoring 72 runs in 53 balls, posting the target of 282 runs.

Indian team will look forward to continue their winning momentum and also, will try to fix rare bugs in the top order. Next match is in Kolkata which is known to be spinners friendly. Indian fans will hope for yet another all round performance from Indian team.