Australia managed to bounce back in the Paytm T20 International Series after beating Team India by 8 wickets at Barsapara Cricket Stadium in Guwahati, credits to their fiery pacer – Jason Behrendoff who managed to bag 4 crucial wickets with his lightening fast speed in order to devastate the Indian batting lineup. 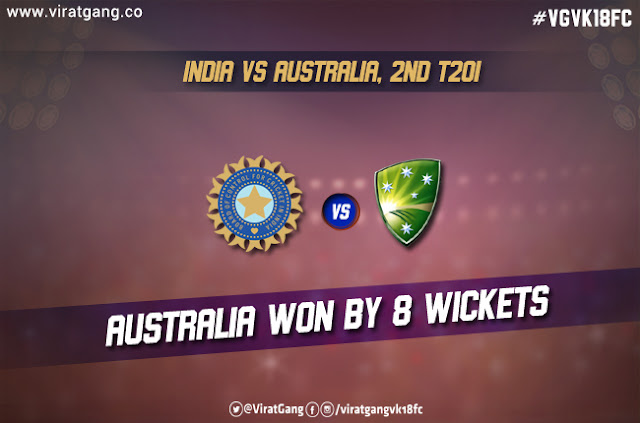 Put into bat first, the Indian batsmen miserably failed in front of Australia’s deadly bowling. No batsman from the lineup managed to click at any point of the match. Jason Behrendoff proved to be the joker out of the pack. Indian batsmen had a really tough time facing his 24 classic seam deliveries and never really seemed to be comfortable against him. He managed to take 4 wickets by giving away mere 21 runs at the economy rate of 5.21.

On the other hand, Australia were off to bad start in the response of this short yet tricky chase. They lost their in-form openers – Aaron Finch and David Warner quite cheaply, which added to their misery. But thanks to the matured batting approach by Moises Henriques and Travis Head which assured the victory to Aussies, which they deserved.

By winning the 2nd T20 International with ease, Australia has managed to keep the Paytm Twenty20 International Series alive and both the opponents will give in their all to win the series in the decider at Hyderabad.