Test, One Day, T20 – There isn’t any format where India hasn’t shown their supremacy in the recent times. After defeating Australia by 4-1 in the 5 match ODI series the hosts have now taken to the shorter version of the game and are continuing their legacy. 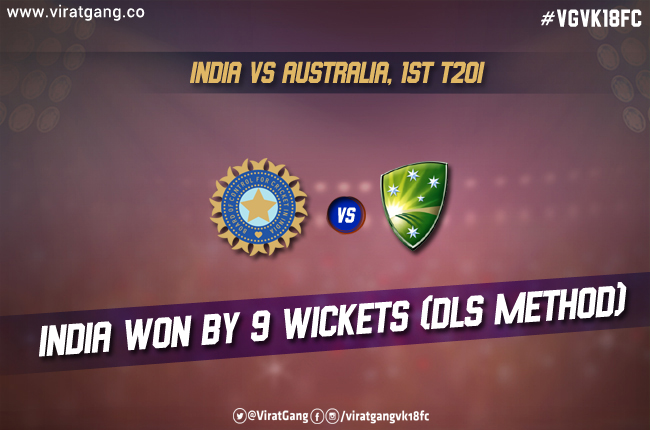 1st T20 played between India vs Australia at Ranchi ends up with a 9 wicket win (DLS) for the former. It was an important win for India at the toss considering the weather at the venue and they decided to have a ‘Bowl’. An innings that started with the Finch storm gradually lost its strength and the Aussie batsmen fell against the power of the Indian bowlers. Bumrah & Yadav both were instrumental and chipped in a couple of wickets each. The Australians were forced to stop by the Rain Gods when they were 8 balls or as Indian fans would say 2 wickets away from ending their innings. On the tricky Ranchi pinch where the guests were succumbing to the conditions, it was the rain which came in and kept the action on hold.

As the rain ceased, it was a target of 48 which had to be chased by India in 6 overs according to the Duckworth-Lewis method. A boundary by Rohit Sharma on the very first ball summed up the way Indians saw this chase. Having hit a Maximum on one delivery and departing on the very next, he was followed by another specialist – the Captain himself. Virat Kohli along with Shikhar Dhawan finished things off effortlessly. Kuldeep Yadav was given the Man of the Match award.

If I were to give examples of matches which could have turned out to be absolute crackers but ended up being one-sided, this would be in the top slot. One wouldn’t be wrong in getting his/her expectations high when the opposition is as fierce as Australia. Hoping that we get to witness the vigor they possess in the last match of the T20 series and the final game of the tour.