The way New Zealand has marked their arrival in style promises this Paytm ODI Series to be super exciting. Though Team India was full of confidence coming into the series after convincingly defeating Australia recently, New Zealand’s wise game plan and strategy broke it with precision. 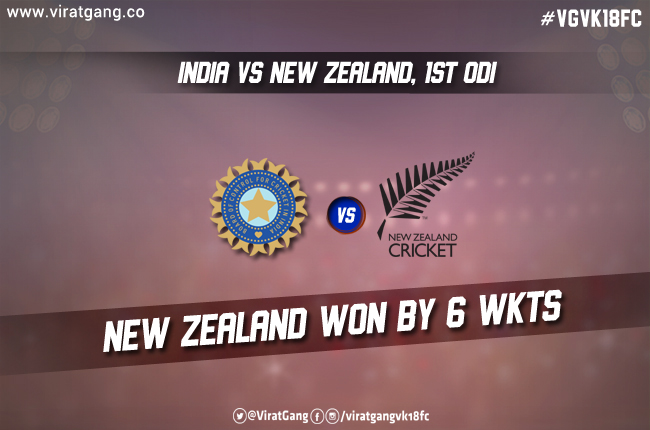 New Zealand showed their class by defeating the hosts, who were seem to be in a sublime form prior to this match. The way they had prepared and played with focus was too hard to breach through. Also, the way their players adapt themselves in the scorching heat of Mumbai was commendable. On the other hand, Team India wasn’t seen playing in the way they are known for!

New Zealand came back with a well-rested squad as this was the 1st ODI, they were playing post the Champions Trophy in England. Whereas, Team India were carrying forward their caravan of 15 ODIs, 4 T20s & Tests. Though, Team India’s lack of preparation and homework was clearly visible.

New Zealand had their priority on playing the left hand-right hand batting combination throughout their innings and this is the reason why Nathan Latham was pulled down from the opening spot and sent in at No. 5, which definitely worked in their favor. The way he was sweeping against the spinners was a treat to watch. He was well-accompanied by the experienced campaigner – Ross Taylor in this chase, who just missed out on scoring a century by mere 5 runs.

As far India’s batting is concerned, none of the batsmen except Captain Virat Kohli managed to click and this is the reason why they managed to score mere 280 runs in their quota of 50 overs irrespective of Virat Kohli’s blistering century. He scored 121 runs off 125 balls at the strike rate of 96.80, which consisted of 9 fours and couple of sixes.

Credits to the economical bowling of Trent Boult, which did the job for New Zealand. Also, Tim Southee’s immense experienced proved handy to the visitors and gave an edge to them over Team India at the end of first half itself.

New Zealand definitely outplayed Team India, but this seems to be making of a good series ahead because you just cannot keep Captain Kohli’s brigade out of action for long, especially when they are wounded in such a manner.

Mohammed Shami and Umesh Yadav included in the Indian squad as R. Ashwin and Ravindra Jadeja rested for the Australian One-Day Internationals