Post the magnificent win over the visitors on Sunday, Team India has arrived at Kolkata with their heads held high to continue their winning ways in the 2nd One-Day International at the Eden Gardens as well! 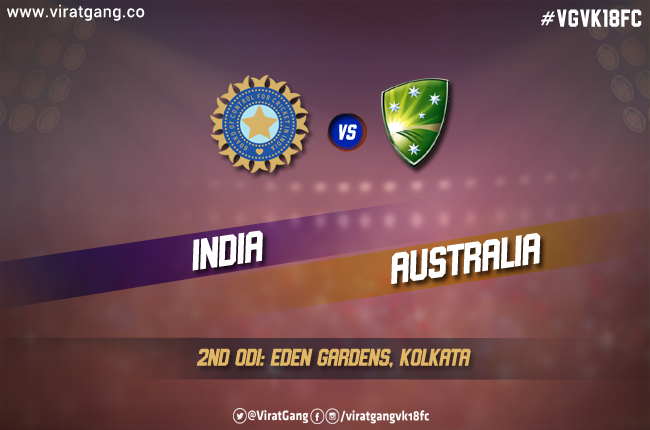 The way India’s spin duo – Yuzvendra Chahal and Kuldeep Yadav shook Australia’s batting lineup was just the hint of the things to come their way as the tournament will advance. Now that Team India has got the much-needed head-start in this crucial series, Captain Kohli will be in no mood to loosen this grip over the visitors for sure.

Though Australia lost the rain-interrupted ODI by a decent margin, the one plus they will take ahead will be Glenn Maxwell’s slogging which was responsible to raise their hopes a bit in the 1st ODI. As far the Indian camp is concerned, they won’t mind banking on Hardik Pandya’s form once again as he seems to be in the prime form of his career currently.

On the other hand, respective skippers of both the teams will surely look to flaunt their class with the bat after a not-so-convincing day in Chennai. Virat Kohli and Steve Smith were cheaply departed at the scores of 0 & 1 respectively the other day, which surely don’t do justice to their prestigious batting career.

I don’t think Virat Kohli will be much interested in making changes as the current team looks well-balanced to me. Whereas, Australia can experiment a bit in their batting order and expect their key players like David Warner and James Faulkner to contribute.

“We have enough variation in our attack but it’s about executing your plans. In Australia you can mess up your length a little bit and you will probably get away with it purely because of the (size of the ground). Here, the length is very important.” said Adam Zampa, the Australian leg-spinner in the recent press conference.

Though the weather forecast in Kolkata doesn’t look ideal for Cricket, the 2nd one-dayer is under the rain threat. I hope this contest doesn’t draw away and we get an outcome for the welfare of the series as well as the crowd, which is expected to turn in the large number to back the men in blue.