India vs Australia 5th ODI Review: Rohit Sharma And Axar Patel Proved To Be The Show Stealer At Nagpur

Rohit Sharma added yet another extraordinary milestone in his kitty with his elegant century as India thrashed Australia by 7 wickets in yet another successful chase at Vidarbha Cricket Association Stadium in Nagpur to seal the Paytm ODI Series by 4-1. 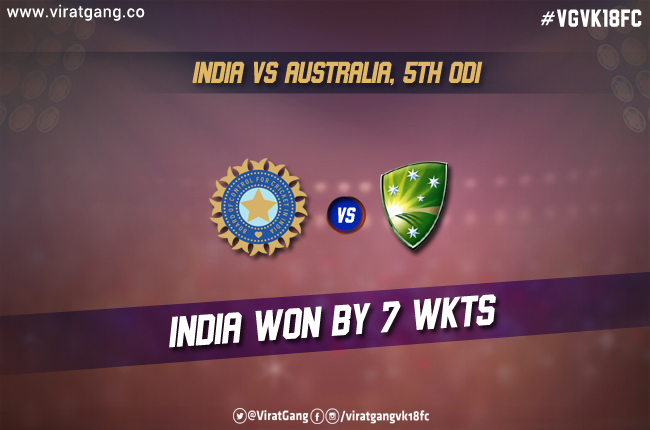 Indian openers – Rohit Sharma and Ajinkya Rahane provided just the start doctor prescribed to the Indian team, chasing the unpretentious target of 243 set by the visitors. Rahane and Rohit made sure that they leave no room for the Aussies by giving them early wickets. They put on clinical 124 runs for the opening stand. It was their third century partnership in a row together.

Ajinkya Rahane failed once again to transform his half-century into a big knock after Nathan Coulter-Nile showed him the way to pavilion on 61 runs. Whereas, Rohit Sharma finally managed to play a big innings by scoring his 14th One-Day International Century and gracing the crowd with his classy batting. He also became the 9th Indian batsman to complete 6000 runs in ODIs.

Though Rohit Sharma and Virat Kohli failed to finish off the proceedings in style, but they made sure that they guide Team India on the verge of winning. Manish Pandey hit the winning boundary and eventually took Team India home in mere 42.5 overs.

This rather comfortable chase was complimented pretty well with the efforts of Indian bowlers, who managed to restrict Australia at below par score in-spite of David Warner and Aaron Finch’s sublime batting. Left-arm Spinner – Axar Patel topped the pack among Team India’s bowling department by bagging 3 for 38 in his quota of 10 overs.