The supreme form of Team India continues as they conquer the Eden Gardens by defeating the guests – Australia by 50 runs. This clash proved to be of the kind one would generally expect at a venue like Eden where spectators come in huge numbers and show their full support. 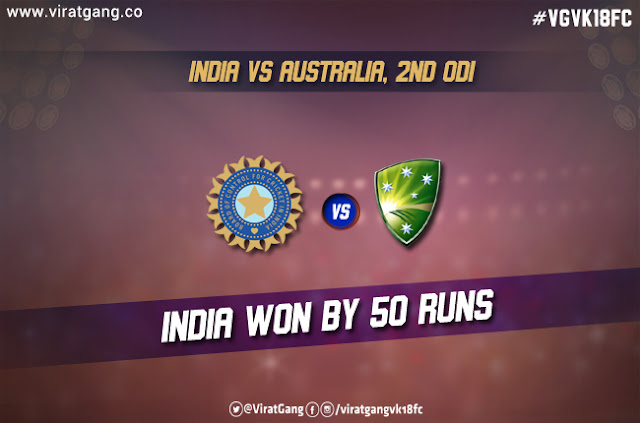 Having taken a 1-0 lead at Chepauk on the last Sunday, India’s confidence received a major boost. In the 2nd ODI at Kolkata they won the toss and opted to Bat. As the nation was hoping for another gem of an innings from Rohit Sharma who has had a brilliant record at Eden, he lost his wicket at 7. Came in the Captain and his partnership with Ajinkya Rahane steadied the team’s ship. While Rahane scored 55, Virat Kohli missed his 31st ODI Ton by 8 runs as he was bowled out by Coulter-Nile. Post the latter’s wicket it became relatively tough for the rest of the order to manage the remaining innings. Amidst this, a no ball promoted confusion and added to the drama. Hardik Pandya’s hit off a waist high full toss made the ball land in Steve Smith’s hand. It had begun to rain and without realising that it was a no ball, the former started walking back to the pavilion. At this point, Smith seeing an opportunity threw the ball to Kane Richardson who knocked the bails. However, the umpires had declared the ball to be dead. Pandya did return but was sent back on a score of 20. The run rate slowed down. At one point 300 looked like no big task but here things looked pretty tight for the team. India were bowled out on 252, the last wicket having been taken on the last ball. NCN & Kane Richardson chipped in 3 wickets each. Though by the end of the innings the Australians almost had the ball in their court, it was a difficult 50 over period for them. The humidity was high and the oppressive conditions sucked out their energies leading them to ask for aids and replacements quite often.

Australia did not quite have the start they would have wanted after a good end to the first innings. In the first 5 overs, both of their opening batsmen were sent back to the pavilion by Bhuvneshwar Kumar and India had begun to take the ball back into the court. The Smith-Head partnership was a tough phase for India. As the wickets of the duo along with that of Glenn Maxwell were claimed, things eased down a bit. Marcus Stoinis was the lone fighter henceforth and was unbeaten at 62 when the rest of the team collapsed. A bowler to have played a massive role in making this collapse happen as quickly as possible was Kuldeep Yadav. The chinaman became the 3rd Indian to pick up a Hat-trick in one-day international cricket after Kapil Dev and Chetan Sharma. He achieved the feat by dismissing Matthew Wade, Ashton Agar, and Pat Cummins. Yadav was not having a good time with the ball until the 33rd over when the hat- trick happened. Accompanying him in the job were Kumar who picked up 3 wickets and Hardik Pandya-Yuzvendra Chahal getting 2 each.

Man of the Match title has been conferred to Virat Kohli for his brilliant innings. 2-0 lead in the 5 ODI Series and the action will shift to Indore where the 3rd ODI will be played on 24th September.  Indore has proven to be one great venue for the Indian players. A victory and the series will be in India’s name. See you on Sunday!