Team India’s domination was clearly visible throughout the Paytm ODI Series, credits to the fearless and positive approach of Captain Virat Kohli. The Men in Blue definitely showcased impressive talent with both – bat and bowl whereas, the visitors on the other hand, just managed to win 1 win in the series. This 4-1 series win has now taken Team India the top of ICC ODI rankings as well! 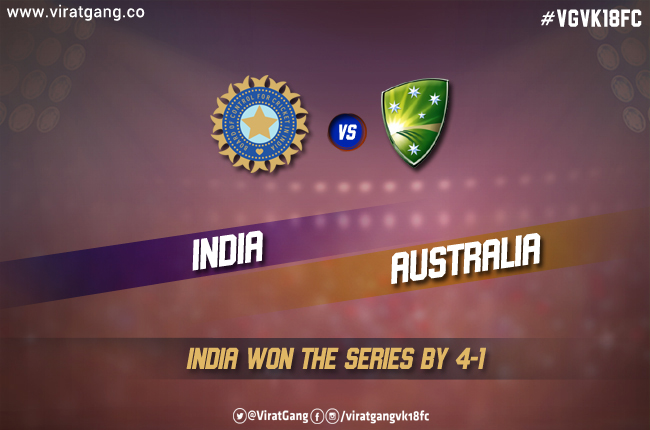 South Africa has been sitting on the top of ODI rankings since long but Virat Kohli’s Team India has managed to surpass them after an impressive win over the ex-bosses of World Cricket. This might just be the beginning of a new era because the way Virat Kohli’s team is performing impressively and consistently in past few series is simply outstanding!

The highlight of the series has to be the way individuals have displayed their all-round skills and credits of this goes to Captain Kohli and Head Coach – Ravi Shastri. Almost every player of the squad performed and contributed his share in team’s success, whenever given a chance and this is definitely something Team India will take with open arms as far their World Cup 2019 preparations are concerned.

Though Team India is enjoying glory in their home fixtures currently, their real test will begin in 2018 overseas tour but Virat Kohli and co. Looks confident and unbeatable for it.

India and Australia are about to lock the horns in 3 T20 Internationals, starting from October 7, 2017 now.