Chasing the mammoth target of 335 runs, Team India fall 21 runs short of the victory. They manage to score 313 runs with the loss of 8 wickets in their quota of 50 overs. 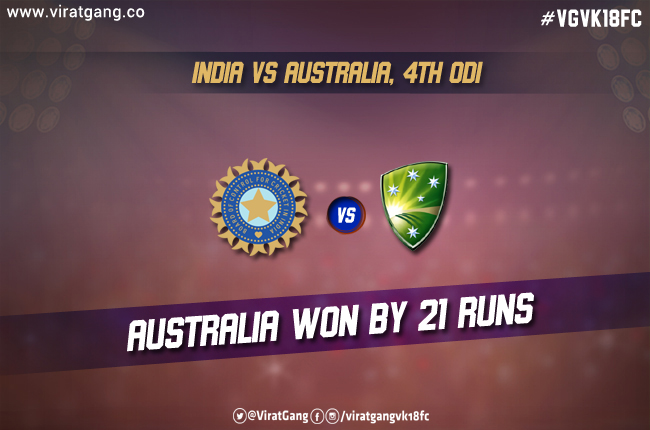 Australia had a last laugh on Thursday evening as they finally manage to get a winning break in the Paytm ODI Series. They defeated the home team by the margin of 21 runs, credits to their both departments which finally clicked in sync.

Aussies were off to a flying start, courtesy – Aaron Finch & David Warner’s supreme opening partnership of 231 runs. David Warner scored a dazzling century in his landmark 100th ODI whereas, Aaron finch mere 6 runs short of bagging yet another ton in his kitty. Though Australian middle order lost the track in the middle, Peter Handscomb made sure that his late slogging helps his team set a respectable target. Australia scored 334/5 with Umesh Yadav bagging 4 wickets for Team India.

Rohit Sharma and Ajinkya Rahane provided just the start which Team India needed but failed to transform their half-centuries into big scores, which was followed by Virat Kohli departing cheaply. Kedar Jadhav and Hardik Pandya did their best to initiate the recovery later but never got an upper hand over the Australian bowlers. MS Dhoni’s wicket on the last ball of 48th over was enough to draw the curtains on India’s hopes.

Though Virat Kohli miss out on breaking MS Dhoni’s record of winning more than 9 ODIs on the trot, India already has an unassailable 3-1 lead in the series.