Royal Challengers Bangalore managed to pull of yet another nail-biter at M. Chinnaswamy Stadium by defeating Sunrisers Hyderabad in the crucial RCB vs SRH IPL 2018 match to remain in the race of making it to the play-off. 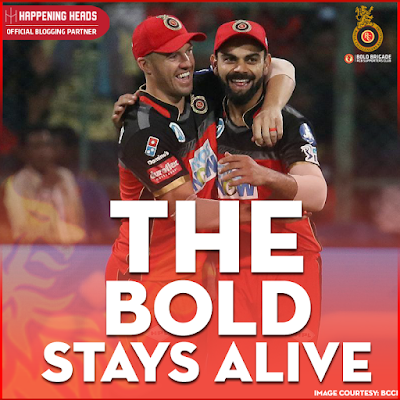 Kane Williamson showed no hesitation to field first after winning the toss, considering the fact that no target is comfortable enough to defend on the batting paradise at M. Chinnaswamy Stadium in Bengaluru. Virat Kohli kept his strategy of the previous match intact and decided to open the innings with Parthiv Patel but Sunrisers Hyderabad bowlers proved way too lethal to RCB’s opening pair. RCB was struggling on 35/2 inside the 5 overs at that moment.

AB de Villiers got into the act as soon as he entered the field last night. He was well-accompanied with the likes of Moeen Ali’s quality slogging which kept the momentum going for RCB. The duo specially targeted Basil Thampi, who was taken into the squad in the place of Bhuvneshwar Kumar. He end up conceding whooping 70 runs in his quota of 4 overs.

After quick-fire half-centuries from AB de Villiers and Moeen Ali, Colin de Grandhomme and Sarfaraz Khan took the initiative to slog in the death overs and helped Royal Challengers Bangalore to cross the 200-runs mark with ease. They scored 218 runs with the loss of 6 wickets in 20 overs. Afghanistan’s leggie – Rashid Khan, once again proved the magician with ball for SRH with figures of 3/27 in 4 overs.

On the other hand, Kane Williamson kept the hopes of Sunrisers Hyderabad alive after scoring his 8th half-century of this season. He was well assisted by Manish Pandey on the other end, their century-stand really made things worse for RCB bowlers.

The equation had came down to 20 runs from 6 balls for SRH but Mohammed Siraj kept his calm, when it was needed the most and gave away mere 5 runs in the final over. He also managed to bag the key wicket of Kane Williamson, courtesy: a brilliant acrobatic catch on the boundary rope by AB de Villiers in the process.

RCB has now jumped to 5th spot in the IPL 2018 points table and there hopes are pretty much alive at the moment. Whereas, Sunrisers Hyderabad still remain the table toppers even after suffering their 4th loss of the season. Royal Challengers Bangalore will be next locking the horns with Rajasthan Royals at Sawai Mansingh Stadium tomorrow.

Celebrity Clasico is back, Virat Kohli’s All Heart Football Club to take on Abhishek Bachchan’s All Stars Football Club on October 15th